Bjørk Matias Friis has just been announced as one of the 5 nominees for Danish comics award Ping Prisen. Ping Prisen, named after legendary comics creator Storm P character Ping, has long been one of the most coveted awards in Danish comics and this marks Friis’ second nomination for the award.

Last time around, Friis was nominated for Best Debut, while this year’s nomination is for Best Comic for YA.
The competition is fierce though, as he faces off with internationally acclaimed creators Pénélope Bagieu, Fabian Vehlmann and Bruno Gazotti, as well as fellow Danes Sabine Lemire and Rasmus Bregnhøj and Morten Dürr and Lars Horneman. 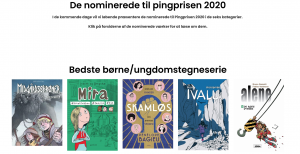